MASTER OF NUANCE
When music becomes poetry, when virtuosity recedes into the background and poised expression takes centre stage, moments of great beauty can occur. Britta Elschner […] leaves a strong impression on her audience. […] Nothing in the way she plays the piano seems incidental or left to chance; each note is carefully selected for the particular moment, creating a rich palette of nuance. [...] This diversity of interpretation makes listening to Elschner a genuine pleasure.

Britta Elschner (2nd prize) from Worms began with a highly subtle rendering of the second movement of Hofmann’s sonata, combining rich shading with clear rhythmic profiling. She went on to excel in Edvard Grieg’s ballad with delicate lyricism, rousing cascades and clever use of agogics.

Britta Elschner’s playing has reached a level where listening to her is a real treat – one is entranced by the acoustic splendour of her sophisticated sense of touch and moved by the intensity of musical thought. She interpreted Chopin’s Ballades with considerable style and accomplishment in every detail.

It is clear that Britta Elschner feels at ease with Chopin and Schumann – you can hear it and sense it in every note. But she appears to have an even deeper connection to Rachmaninov, interpreting his stirring ‘moment musical’ with a depth well in advance of her years.

The nine-time winner of the nationwide youth music competition ‘Jugend musiziert’ certainly lived up to expectations. Her powerful, highly advanced pianism won her many fans among the audience. A particularly gripping and dramatically versatile performance of Franz Liszt’s ‘Etude d'exécution transcendante Nr. 10’ earned her sustained applause.

Elschner’s spirited ‘Fantasy on Carmen’ was certainly one of the evening’s highlights.

Britta Elschner not only provided her [Julia Oesch] with seamless accompaniment, but also gave a passionate rendition of Busoni’s Fantasy on Carmen.

In his selection of singers and musicians, director Rainer Pudenz scored a real coup: the pianist Britta Elschner knows every trick in the score. She was as comfortable with Mozart as with Alban Berg; but she really came into her own accompanying the final aria of Monteverdi’s The Coronation of Poppea.

Britta Elschner accompanied the ensemble on the piano with verve.

The pianist Britta Elschner certainly earned her share of the applause […] As an empathetic and assured accompanist and woman, she clearly had a demanding role to play.

This Mahler composition not only showcased the singer’s fine voice, it also gave the outstanding accompanist, Britta Elschner, the opportunity to shine, with the pianist only taking a well-earned break as actress Simone Jürgens began her performance.

Dirk Bach brought along a formidable assistant. The pianist Britta Elschner had prepared a musical composition with passages from various Wagner operas. Pausing to catch his breath, Bach listened with pleasure, closing his eyes as if in a dream. Elschner has a keen ear for the symphonic.

Huguet, a trained opera singer, was supported by Britta Elschner, whose piano accompaniment was both sympathetic and brimming with energy.

With a delicate, bittersweet touch of the key, the last note of Liebestod from Wagner’s Tristan und Isolde fades to silence. […] At the piano, Elschner captures the drama of the piece just as well as the orchestral version. The sustained applause is well earned. 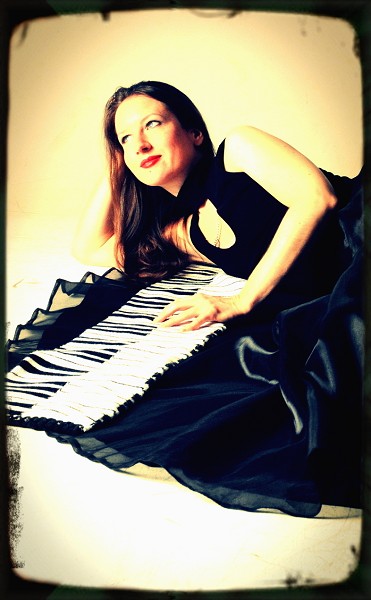